Disclosure: We receive compensation if you choose to speak to one of the trusted timeshare exit companies mentioned here. The following information is for educational purposes and is not to be considered professional or legal advice.

Timeshare Exit Team is a large timeshare exit company with over 30 locations in the United States including Canada. Timeshare Exit Team also does business as Reed Hein & Associates, LLC, which is based out of Kirkland, Washington.

Based specifically on the information we read on the “About Us” page, Timeshare Exit team started in 2012 and the company help timeshare owners end their timeshare ownerships “safely and legitimately”.

The company’s main goal is to help you regain your financial freedom and get out of your timeshare contract. Timeshare Exit Team is not a law firm, nor does the company provide legal advice or representation. Timeshare Exit Team also claims to be the industry leader and have helped over 19,000 people be released from their unwanted timeshares.

On the same “About Us” page, there is a video featuring the company’s founder and CEO Brandon Reed who describes why, as a former timeshare owner himself, he started Timeshare Exit Team. He describes how being a timeshare owner no longer fit his lifestyle after he became a single parent of two young daughters.

He searched for a way out of timeshare obligation for over a year with no real results. Hence his reason for starting Timeshare Exit Team and to date, states that they have helped over 20,000 people. You can also find the same video and others on the company’s YouTube channel under the profile name, “Timeshare Exit Team.”

Overall, their website contains a lot of useful information. We specially like the Timeshare Exit Options” page under the top navigational link titled “Exit Your Timeshare”. In bold letters, the top of the page says “Don’t be Discouraged” followed by 3 steps that you can take today to exit your timeshare.

You can also read more about the process and cost on a page under the same “Timeshare Exist Options” navigation.

We also discovered the process starts with a “free consultation” where the company provides you a checklist, so you are better prepared for the first conversations.

Lastly, they offer a Refund Policy where if the company is unable to obtain an exit for their client, they could be eligible for a refund of the exit fee, minus expenses incurred by the Timeshare Exit Team for any work completed for their client. While nice, this does allude to the fact that a potential client would need to pay up front for any fees.

In terms of reviews, the site has an entire section dedicated to reviews and states that “Our customer are our best critics”. We couldn’t agree more. On the “Reviews” page under “About Us”, you will find a couple of customer video testimonials along with a section of Googles reviews that are automatically updated using a third-party marketing tool called “BirdEye”.

We took a glance at the other pages and they are nicely laid out and simple. We like the addition of the pictures of the various office locations which give this company an air of credibility in the fact the company offers multiple locations across the country to better serve clients.

Dave Ramsey made his fortune in real estate and now provides money advice on his radio show, The Dave Ramsey Show, which reaches the ears of over 13 million listeners each week.

Ramsey also teaches a class on becoming debt-free called Financial Peace University and has authored numerous books on personal finance, some of which have been listed as best-sellers by The New York Times, Wall Street Journal, and Publishers Weekly.

The fact that Ramsey promotes Timeshare Exit Team seems to speak volumes in terms of the company’s legitimacy and value. While some may add that this is due to having a well-funded marketing budget however, from what we understand of Dave Ramsey, he would no associate his business with a fraudulent one regardless of any monetary benefits.

The relationship between Dave Ramsey and Timeshare Exit Team seem to go beyond just a one-time recommendation but an established partnership.

On Dave Ramsey’s website, he provides a link to dedicated Timeshare Exit page where it states that Timeshare Exit has successfully exited over 5,000 Ramsey listeners from their unwanted timeshares since 2014. Dave Ramsey also has a full page of Frequently Asked Questions which are worth reviewing.

While this type of endorsement is great, we still like to recommend working with companies that offer a low up-front fee escrow payment option, so the timeshare cancellation company is only paid in full after the timeshare is cancelled.

Due to the many locations Timeshare Exit Team has, it was difficult to summarize the abundance of reviews available.

We did locate some information available on the Better Business Bureau site where some of the locations have an “alert” listed:

On November 28, 2018, BBB recognized a pattern of complaints from consumers regarding contract, customer service, and guarantee or warranty issues.  Consumers allege the business does not provide adequate updates regarding their cases and does not provide the “100% guarantee” refund.

On December 7, 2018, TimeShare Exit Team responded to BBB and is working with BBB to address these concerns.”

We do see the term “100% Money Back Guarantee” on the older company website of 321exit.com, but do not see specific language alluding to a 100% guarantee on the Timeshare Exit Team website – only the “Refund Policy” on their current site as cite above.

During our research, we did find a case where the Attorney General of Washington filed a suit against Reed Hein and Associates for violations of the Consumer Protection Act and Debt Adjusting Act however in August of 2020, according to prnewswire.com:

Despite the alert, the Better Business Bureau gives Timeshare Exit Team a B- minus rating and the company currently has a 4.23-star rating (out of 5) with an average of 670 reviews. The company had a total of 393 complaints closed in the last 3 years with most of those complaints mentioned the 100% money back guarantee.

Here is a recent review that mentions time frame and cost for their specific case. This client also mentions the hiring of another vendor which alludes to the fact that the company does not and has confirmed it does not have an “in-house” team but outsources. 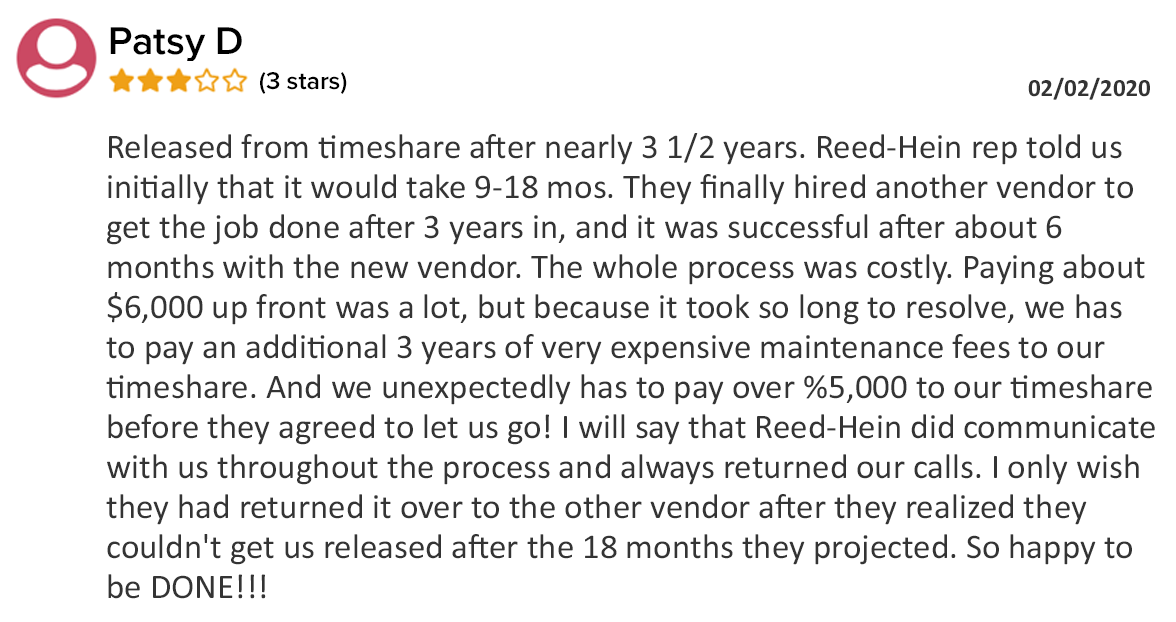 Another reviewer granted the Timeshare Exit Team a 5-star rating:

They truly are mixed reviews.

On 2/19/2021, a person provided a 2-star rating while a person on 2/18/2021 provided a 4-star rating. The complaints are mostly around the lengthy process while some have successfully exited their timeshare and others are still in process or asking for their money back.

We could not locate Google reviews but were able to locate Yelp reviews although the location for this company is Bellevue, WA and according to Yelp, considered closed. It is not clear when Yelp closed this location, but they show 2.5 stars out of 5 and there is still some activity in the “community” section.

Here is an interesting Yelp review where the former client had updated their 2017 review to inform the Yelp community that he would be getting his refund although it took over a year and its not yet clear if he has received the refund yet. 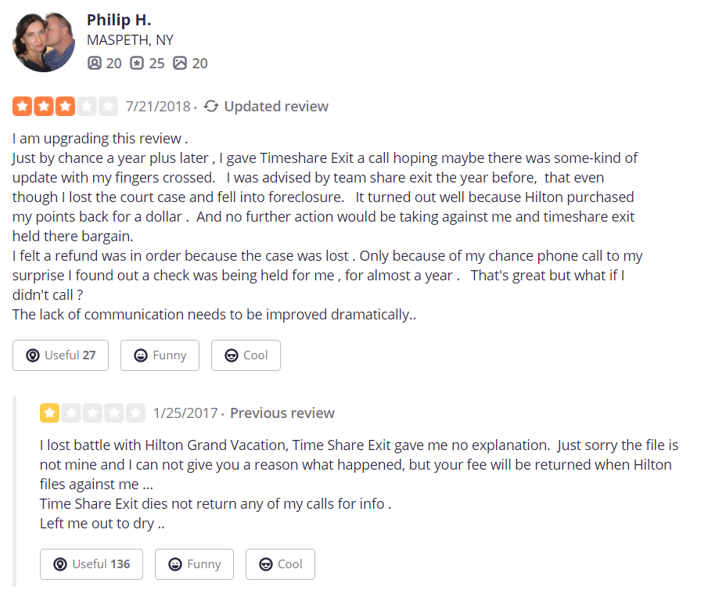 It seems the company has a marketing budget that may be greater than any other timeshare exit businesses out there. The business’s large marketing budget might cause you to believe that the company must charge a higher cost for services than similar companies, but this should not be assumed to be the case. Timeshare Exit Team has a streamlined process for timeshare cancellation, which may allow for the company to provide efficient services at a comparable cost to others in the industry.

The exact numbers of the Timeshare Exit Team cost are difficult to determine online since fees vary depending on a variety of factors, including how easy the timeshare developer is to work with and the type of timeshare.

That being said, the Timeshare Exit Team cost is more transparent than many other timeshare exit companies. While their free consultation is the only way to get a true estimate as to the cost of their services, a Timeshare Exit Team representative has quoted the average cost at $4,000, which can be used as a general guideline.

It is important to note that engaging in negotiations may also contribute to a lower cost for the company’s services.

While it cannot be stated for sure, as a large company, Timeshare Exit Team may employ commissioned salesman that are given a monthly allotment of discount money that they can work with to close sales.

You may be able to get a lowered price simply by asking. It never hurts to try!

On the company website, we only see a “lengthy and challenging” and could take up to 36 months.

We found a Google review where a former client mentioned over 2 years, but of course every case is different so only use this information as a guideline.

Timeshare Exit Team states that the company offers a “refund policy” and it appears the company does not use “100% Money Back Guarantee” probably due to the increase of complaints and other legal actions.  Regardless, the company offers a refund of some, if not all money if their team should fail at cancelling your timeshare contract.

While the company is a well-established one in the industry, working with timeshare exit companies that offer a low up-front fee escrow payment option that allows you to initially put money into a third-party holding account to be released to the business at the time of their successful completion of said services is always more secure than working with a company that charges you directly up-front. This is why we like to recommend using an escrow option instead of paying fees up front.

If you would like to hear more about cancelling your timeshare, please fill out a contact form, give us a call or engage in our live chat.

Get Rid of Pueblo Bonito Timeshare

Get Rid of Vistana Timeshare

Get Rid of Vidanta Timeshare

Get Rid of GeoHoliday Timeshare

Get Rid of Bahia Principe Timeshare

Get Rid of Tahiti Village Timeshare

Get Rid of Sheraton Timeshare

Walking Away From Timeshare Maintenance Fees

Get Rid of Grand Solmar Timeshare

Get Rid of Garza Blanca Timeshare

Get Rid of Interval International Timeshare

Always contact your resort or timeshare developer first before contacting a timeshare exit company. Some have exit programs of their own that can assist you with a timeshare cancellation

TimeshareExitCompanies.com is not a law firm.